I have a tendency to ask myself if I’m enjoying a film at roughly the thirty minute mark. Some I will have already checked out of. For others I might say “this is good, I’m enjoying it”. And for the best I won’t even be aware of the question as I’m already lost within the story.

Elysium, Neil Blomkamp’s follow-up to the astounding 2009 sci-fi movie-with-a-message District 9, sadly sits in the middle camp. Yeah I liked it. Yeah it was good. It was just not great. This may sound overly harsh, as if I’m being picky – Like I’m sleeping with a model, but not a super model.

Like a finely crafted meal, it has all the ingredients for success: A great cast, the best effects, and a visionary director. It hasn’t been reduced to McDonalds-style gruel for all the family by any executives wanting a PG-13 summer blockbuster. Its’ message is loud and clear. It is wholly anti-capitalist, and boasts a body count and a level of violence that would make a Conservative chuck up his Waitrose bagel.

So yeah, all the pieces are present and correct. So why doesn’t it work?

Let’s back-up and set the scene. The future. It’s grim and over-populated. The richest and most privileged live on an orbiting space station called Elysium. Things are pretty much perfect there. On Earth everyone lives in a something akin to a council estate mixed with a favela. It’s not nice.

We have Matt Damon, a reformed ne’er-do-well who is struggling to stay on the straight and narrow. After an accident at work he is given one week to live. The technology to save him exists on Elysium. So off he goes on his quest of ascension to the heavens to save his own life. In his way is a security chief bitch Jodie Foster and her raving Earth-bound samurai bastard Sharlto Copley. Cue much action as Damon defies the odds to reach the unreachable.

It sounds infinitely cool, and the marketing surrounding it made it look awesome. View the trailer below.

And largely it lives up to the promise. However, it failed to grab me and keep hold of me for the full 110 minutes. Why?

I just didn’t connect with Damon.

I like Damon as an actor, but his character just didn’t do it for me. I didn’t care if he lived or died. I didn’t buy his sob story, I wasn’t cringing when he gets cyborgified, and I didn’t feel every blow when Copley was fucking him up at the end (like I did in District 9). Not that it was Damon’s fault or the fact his character wasn’t so much of a goodie goodie; The little girl and her Mum characters? Didn’t give a shit about them either.

The film has rightly been much compared to District 9. Where I feel D9 succeeds is by quickly establishing a time, a place and a scenario. The documentary style introduces us to the characters and the setting on a personal, almost identifiable level. It’s only when the events develop beyond the confines of the found footage camera do we shift to standard widescreen fare. This transition is seamless.

The setup of Elysium is handled by the more traditional use of childhood flashbacks. This approach is just not as clever, subtle, nor as engrossing as its’ predecessor. Damon wants to go to Elysium as a child simply because it’s there. And there’s nothing wrong with wanting to climb the un-climbable mountain. But it isn’t as interesting as “Oh shit I’m turning into an alien and the government want to dissect my brain” – Hence the need for more jeopardy with the whole dying storyline.

Copley’s Wikus learns a lesson in District 9. He goes on a journey. His transformation is not only physical, but mental and spiritual. We’re brought closer to understanding an alien race. It teaches tolerance, forgiveness, acceptance and that our prejudices are ultimately corrupt. Elysium only poses the notion that the rich and entitled are scum from beginning to end. This assertion isn’t slowly made and is only reinforced throughout the film.

But we don’t see any of the rich or entitled. Our only real contact is Jodie Foster making a weak grasp for power in an already idyllic world. Is the message here that ultimate power corrupts? Haven’t we already learned this lesson? 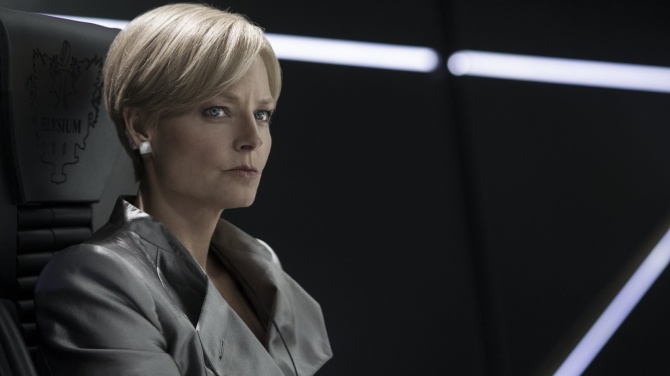 This lack of place and sense of reality sadly pervades the film. You never get to see much of either world. You don’t see enough of Earth to hate or revile it, or enough of Elysium to envy it. I would have much preferred an all or nothing approach, similar to Battle Angel Alita – you don’t see Elysium until Damon steps foot off the ship. Cue dazzling spectacle of opulence.

But let’s not forget that Elysium is still a good film. It looks magnificent, the action is taken from an anime flick and the main cast is fantastic. We have some underused badasses such as Faran Tahir and Shredder-come-Roger Van Zant William Fichtner, but Copley (whose last significant sighting was in the woeful A-Team) really steals the show.

It’s also a big budget sci-fi movie, and an original one at that. We don’t see many of these often, at least not without a comic book or novel tie in. We have to support what we get, even the flawed beauties such as Elysium, Pacific Rim or Sunshine. They aren’t flawless like District 9, or Looper or Inception, but we still want more of them damnit!