Some of director Ron Howard’s best work is his realization of real life events; Apollo 13, A Beautiful Mind, Frost/Nixon. Now Rush, his 2013 motorsport biopic, can not only proudly join that list, but also be considered one of the best films of the year. Spoilers ahead.

Depicting Formula 1 racing drivers James Hunt (Chris Hemsworth – Thor, Cabin in the Woods) and Niki Lauda (Daniel Brühl – Inglourious Basterds, Bourne Ultimatum), the movie focuses on the rivalry between the two best racers of the era. Both are likable and lamentable in equal measure. The handsome, boozing and womanising Brit Hunt bullies his way to success through raw talent alone, whilst the Austrian Lauda forgoes personal friendships and popularity in a no-nonsense professional approach.

Both characters start as rich, bored bastards, drawn to the unlikely career for the thrills and excitement it offers. They first meet and spit nails at each other at a Formula 3 race in 1970; Hunt’s bravado causes both racers to spin out, though he still claims victory. The livid Lauda condemns him for a fool, and they go their separate ways; the Austrian joining Ferrari whilst Hunt bones some broad from Game of Thrones. Yes you get to see Hemsworth’s ass. Yes it is enviable. 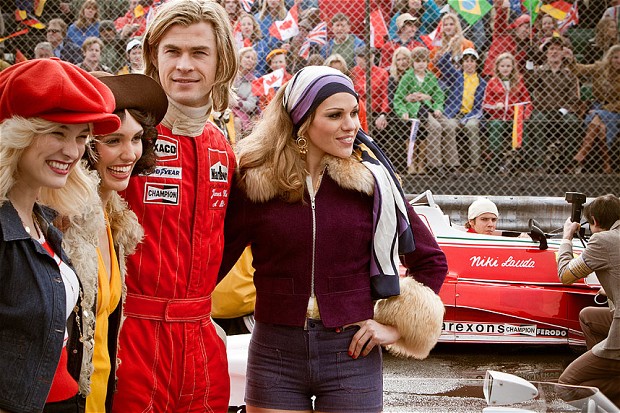 While the film charts both their unique and polar opposite ascensions to racing’s Mount Olympus, the real focus is on the 1976 season. Yes there’s bits about Hunt marrying some socialite, but we all know he’s all about the racing. He’s like that cop in that movie who is about to break the drug ring, but his crazy wife is on at him because he’s missed little Timmy’s dance recital. HE’S DEA BITCH! There’s lives at stake! Anyway, the inevitable happens, and the relationship falls to bits. Lauda meanwhile seduces a beautiful woman, Marlene Knaus (Alexandra Maria Lara – Control), with his driving prowess in one of the more cool non-race related cut-aways.

But back to the Rushing; Lauda proudly won the previous season, giving Hunt the motivation to double his efforts in his return. However it all goes tits up for the Brit as Lauda claims two victories. There’s some rules shenanigans, and during a test lap on a super wet German Grand Prix, another driver crashes and mangles his leg. Lauda speaks up claiming that it’s too dangerous. Hunt and other racers leap to goad him, branding him afraid. Rising to the bait, Lauda decides to race.

The inevitable happens and Lauda’s car suffers a fault at the worst possible point, propelling him into a wall. Other cars collide with him, and the whole mess explodes into shitty flames. Lauda is eventually pulled from the wreckage, burnt and in tatters but breathing. Now this is the turning point of the film, where it goes from a simple rivalry and is elevated to the next level of bad-assery. James Hunt goes onto win all the races now, whilst the Austrian is put back together in the hospital. Spurred by Hunt’s success, he powers through his recovery, and returns to the car mere weeks later. This incredible feat realised on screen is at times painful to watch, but awesomely powerful in equal measure. It is all the more potent when we consider this is exactly as it happened too.

Lauda’s injury and subsequent return sets up the final act of the film. Lauda is still ahead on points, but Hunt can catch up with a win in the last race. Like a ominous dare, the final race of the season is again beset with rain. Both racers share a knowing glance before the race begins. We know Hunt will try to win at all costs, but Lauda is torn; but not by fear, but by the love of his wife. He pulls out after only one lap, the victory and the championship not worth his marriage or his life. Hunt of course inevitably goes onto win the race and the title.

It’s here where I wish history had been different, as like in Heat, I feel the wrong man won. The journey Lauda takes us on is one of much greater struggle, whereas Hunt gets by on raw talent and good-looks alone. However the film isn’t so much about the winning. It’s about the respect they earn for each other. Starting out as hated rivals, they end still as rivals but as friends and equals as well. They’re like Balboa and Apollo, Kirk and Spock. Ultimately, as different as they are, only they truly understand each other and their compulsions to be the best.

I found the film both fascinating and exciting, despite a lack of interest and knowledge in motorsport in general. Similar to the fantastic 2010 documentary Senna, Rush goes to great lengths to dispel the myth that F1 is simply driving around in circles. Instead the focus is on the skill and bravery of the drivers, and how their obsession with speed and victory at all costs can impact their lives, and the lives of their loved ones. Visually it’s very effective, with much of the monotony of motor racing removed – it’s not just about the cars and this film is not for those expecting Fast & Furious levels of pimped rides. It all looks very authentic, and the casting is entirely inspired; not only do both actors (especially Brühl) really pull off the accents and the intensity, they both look so much like their real world characters.

One thing I found curious is why the American Howard chose to make this film. Formula 1 is not what I would consider to be an exciting sport, nor one with much universal (or American) appeal.  The fact it features two highly flawed characters from two normally reviled nationalities is also interesting. We’re typically cast as the baddies in Indiana Jones or Star Wars, and the “faux-German” Austrians are usually depicted as merely a stone’s throw from being full blown Nazi’s. Lauda’s standoffishness and Hunt’s toffee-nosed entitlement does not help dismiss these perceptions. Yet it’s these defects that make them so interesting. It’s gratifying to note that the film was successful despite this.

I’d recommend it to anyone, be they racing fans, Hemsworth fans, biopic fans, or whatever. What it boils down to is a fierce rivalry between two complicated and gifted people. Told well it could have been about even the most mundane sport and it would still have been crucial watching. See it now.