In the 90’s you could actually go to the cinema not knowing what you were going to see. You didn’t have to take out a small mortgage to pay back then so you could risk taking a punt on things. The Negotiator was one such punt. A tight action thriller starring two stars at the peaks of their power, it somehow failed to capture the credit it deserved. So let’s revisit this little beauty nearly twenty years on. And that’s not a request. It’s a demand…

END_OF_DOCUMENT_TOKEN_TO_BE_REPLACED

You have to give Nicolas Cage (Face/Off) a fair shake. Just because he’s the direct-to-video ying to Steven Seagal’s yang, it doesn’t detract from his Oscar win or the balls out classics in his back catalogue. It doesn’t matter if most of his recent work is a bit trashy. You never for one moment get the impression he isn’t enjoying himself, and how many of us can say that about our day jobs? So stop clenching your anus the moment you see his balding head on the cover and start appreciating. Plus it’s a nice surprise when you actually find him in something that turns out to be good. Now is that what you gonna find in his 2016 adventure, The Trust? Well we’re gonna find out…

END_OF_DOCUMENT_TOKEN_TO_BE_REPLACED 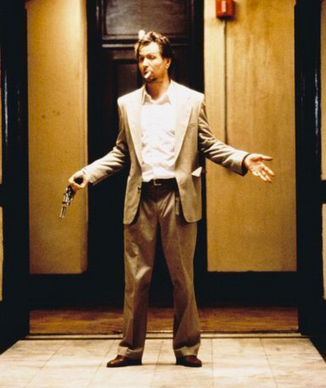 Gary Oldman finally got his Oscar. And a much deserved one at that. His turn as the plucky politician Winston Churchill in The Darkest Hour has finally netted him cinema’s most recognized award. But I don’t think it’s his most memorable role. Nor his best. Admit it – Oldman does his best work as the bad guy. And he’s played some of the baddest. Dracula, that dude who killed JFK, a rasta psychopath in True Romance, some crocked tycoon in Fifth Element, a crazy billionaire with a fucked up face trying to gain revenge on Hannibal Lecter. The list goes on. Yet he was at his most crazed, his most brilliant, in 1994’s Léon: The Professional.