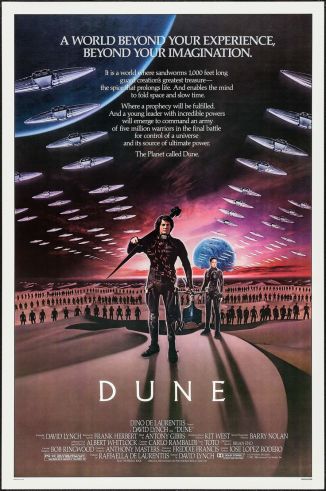 When I was a kid I made a discovery. Like some archeologist stumbling upon a clue to a lost treasure, I came across a “boys” comics annual (like Hotspur or Action or whatever) that had actual photographs of chrome-armored baddies gunning down some people. This was cool for two reasons. One, chrome robots shooting lasers at people will always be badass. Second, back in the 80’s these publications never featured photos, especially not of outside properties. In this case it was a push for kids to star watching the original Battlestar Galactica series. But across from these photos was an ad for something else. Some weird film called “Dune“.