One of my favourite movie pastimes is going on to Netflix or LoveFilm and seeing what is “Ending Soon”. Recently I choose Scott Stewart’s Priest, the follow up to the 2010 snorefest Legion. Sadly there was little improvement.

Priest is set in a dystopian future where humans are confined to vast megacities. The world is barren and devoid of hope or comfort, as befits dark, filth covered futures.

Years previously vampires had pushed humanity to the brink of extinction. Their only salvation was the specially trained Priests – members of the clergy who were trained to kick ass. After much fighting and a cool title montage sequence, the vampires were defeated. The Priests, now useless, became warriors of myth – feared and ultimately shunned.

The film starts with one of the last “crusades”. During the dark, CGI-ridden combat, Karl Urban is sadly lost in one of the massive vampire hives. You totally DON’T see it coming that he’ll be back later in the film (as the baddie, no less).

We skip ahead years and the war is over. But OH NO, Paul Bettany, the chief ass-whooping Priest, discovers his niece has been kidnapped during what is blatantly a vampire attack. Priest knows it was vampires, but no one else believes him. So he has to break his holy vows, escape the city and go after her. Much action, slaying and self-recrimination follows.

Now, let’s get one thing straight – Karl Urban is the best thing about this movie. Not only does he just have the coolest name (followed closely by Maggie Q), he also has the majority of the looking-cool-silohetted-against-various-lighting moments. He has the best look, the cool fucking hat, the best lines, and the most presence.  He is the vampire Clint Eastwood of this film.

Priest is a weird amalgamation of a fantasy epic meets dystopian sci-fi with monster horror scattered throughout. Its Blade Runner meets Blade meets Blades of Glory (just joking on that last one). But with such vastly different genres, it sadly cannot explore or exploit any of the standard tropes to full effect.

It does have incredible visual depth. The designs are excellent, and the whole vision of the world is brilliantly executed. The design of the hover bikes, the train, the city, the costumes, the makeup, the landscapes – it all resembles a mega-budget fantasy epic. Sander’s has really stretched his relatively small $60 million – you really get a lot of bang for your buck.

However, this rich world is scuppered by the short run time of 87 minutes. You are only ever afforded brief glimpses on each location or design – The film never lingers in one place long enough. It never pulls out and shows us the scale of things. It’s just not…wide enough, not long enough, not epic enough.

Bettany’s character is also boring. He forsakes his holy vows within moments in the film, proving how little they must have meant to him all along. Maggie Q does the same. I’d expect these holy super-soldiers to be all about the vows, man. Instead they suffer from Charlie Sheen Platoon levels of post-traumatic stress. Just another element left unexplored.

I would have loved for the doctrine to have been built up so hot and heavy in Bettany’s character, only to see it smashed down by Karl Urban’s turn at villain. Instead he “does what he has to do” because he’s the good guy, which gives him little room to operate.  It’s not like he can’t pull it off – Bettany’s Silas in Da Vinci Code combined deep rage, confused guilt and devout purpose – all elements which could have been explored in Priest. Sadly they are not.

Some of the other cast are also woefully underused. Brad Dourif?! Count Evil?! How about we give him 5 lines? No, how about 4. Only Plummer really gets to chew the fat. Maggie Q doesn’t even get chance to partake in some ass-kickery either! The saving grace, Karl Urban, only really gets to do some snarling, the odd brutal kill, then dies kind of easily.

Speaking of killing, there is slicker murdering and swordplay to be found in the films animated intro than the entire movie.  The live-action action is not very well handled. It’s too quick, too zoomed in, hardly cinematic, and so dark. In fact the whole film is so washed out that the only other blood we see that aren’t pitch black pools is the BBQ sauce that occasionally oozes out of Bettany’s face.

The weapons aren’t as cool, memorable or thematic as the likes of Blade. Even at the end Priest is given this weird looking cross which we all think is going to turn into a badass sword or something. When he does eventually activate it, it only turns out to be tiny little letter opener. It’s like some shitty Derenger you’d find in a Western hooker’s knickers. Not pleased. I’ve seen better weaponry in Beastmaster.

Overall the film has an interesting mythology. The dystopia is really cool, with the religious iconography and setting curious and seldom seen in mainstream cinema. Perhaps as a holiday movie its lack of deep religious message was intentional, but I felt we could have had a lot more dogma, a lot more holy-warrior paladin of God stuff. Instead we get a mopey anime guy. 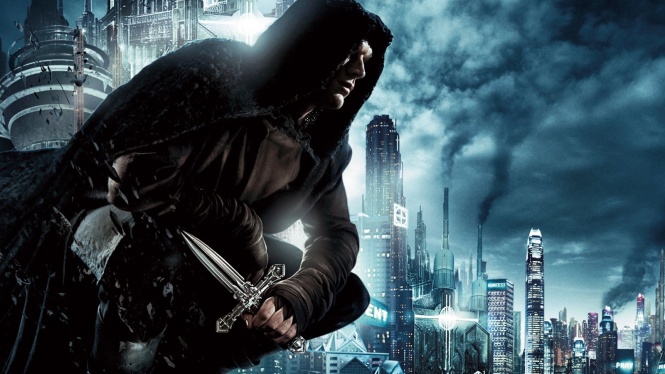 Little touches like the video confessionals we see in the film? Great stuff. More please. The dank corridors, the indoctrinated masses – Oh yes. All the Equilibrium-themed society things were excellent, but again left unexplored. I kept thinking “oh they’d captured all these vampires and now they’re denying attacks – what’s the bet this council have been taken over by vampires and it’s all a big conspiracy” similar to Daybreakers. No dice.

I think it’s based on a book or series of books. Ultimately I couldn’t give a fuck if the fanboys loved it or hated it, because it’s either a good film or a bad film, faithful adaption or not (Watchmen anybody?)  It presumptuously tries to set itself up for a sequel. Perhaps work harder on better dialogue and action before envisioning a LotR trilogy boxed set complete with commentaries and making off documentaries, Mr. Director.

Yet I did like it. I’ve seen far worse. None of the elements (save the design and Karl Urban) were exceptional. Everything had been done better in other films. However it was a curious amalgamation of ideas and concepts. I somehow think if it had had 30 more minutes to play with it would have been a lot meatier, and allow the director to really give us a greater sense of place. Instead it seems like a quick, passing visit.