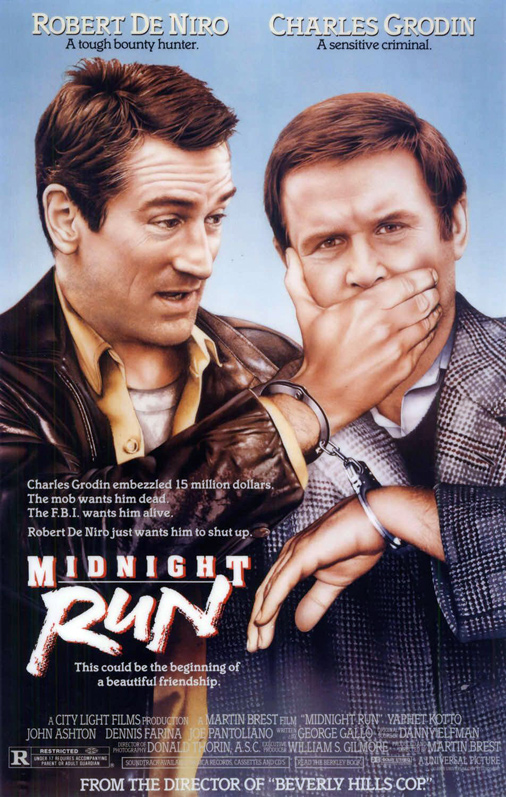 Eight years removed from his 1980’s body-transforming, Oscar-winning stint as elite boxer-turned-washed-up-fatguy, Jake LaMotta in Raging Bull, Robert De Niro was fancying something a bit different. Coming off his turn as history’s most famous gangster Al Capone in The Untouchables, he might have been thinking he’d peaked at playing gangsters. With his second wave of mobster success (Goodfellas, Casino) still years away, you can forgive him for wanting to do something a bit lighter. Something that wouldn’t tax him physically and mentally. Something about a bounty hunter…

De Niro plays Jack Walsh, a down-on-his-luck ex-cop who is prowling the LA night for the scum of the Earth. Setup by the mob and kicked off the force because he refused to take a bribe, he’s now a bounty hunter working for crocked bail bondsmen. To make matters worse, his ex-wife Gail dumped him and moved in with one of the dodgy cops who sent him down, taking his young daughter with her.

To cover his rent he works for some scumbag weasel bondsmen, Eddie Moscone (Joe Pantoliano – The Matrix), who he always has to shake down for his money. Plus he has to watch his back for rival bounty hunter, Marvin Dofler (John Ashton – Beverly Hills Cop). While Marvin ain’t too bright, he always tends to turn up at the wrong time.

After a bad bust, and $200 short of what he was promised for some angry perp, Walsh is sick of the life. Thankfully Moscone has a deal for him. $100k to bring in Jon “The Duke” Mardukas, an accountant who skimmed $15 mil from Chicago mob boss Jimmy Serano (the same one who set Jack up years before). He has until midnight, Friday, to find him and bring him to Moscone.

While De Niro isn’t playing a raging boxer or cruel mafioso, you can still bet he probably spent six months bedded down with real bounty hunters. You see him picking locks? I’m sure he learned how the hell to do that, along with tapping phones, and all sorts of other useful crap. He does sort of play Walsh similar to how he does many of his other hardass, non-gangster roles. There’s not too far a step from Midnight Run‘s Jack Wash to Ronin’s Sam, or Heat’s Neil. But he does have a vulnerable side though, especially for his ex-wife and kid.

He sees the $100k as his ticket out of the situation. He’s got his eyes set on some little cafe or what have you. A retirement of peace. Once he’s set up maybe he’ll pay his old family a visit (after nine years). Sadly for him, this midnight run isn’t going to be as easy as that.

Only minutes after signing his contract with Moscone is he getting harassed by the feds, lead by Special Agent Alonzo Mosely (Yaphet Kotto- Running Man). They’ve been on the Serano case for six years, and they aren’t gonna lose him to some scrub ex-cop for a measly $100k. Alonzo tells Walsh that if he finds the Duke that’s he’s to call him immediately. To illustrate the point he breaks Jack’s cool shades. What a dick move. Fortunately for everyone Jack seizes the moment and steals Alonzo’s ID. Later he’ll uses it to blag his way out of trouble.

Stuff like this really reminded me of Beverly Hills Cop. Same how Jack manages to find the Duke; he’s using street skills against people who think they’re bigger and smarter. It isn’t as played out as the Eddie Murphy juggernaut, but we’ll get to that later. 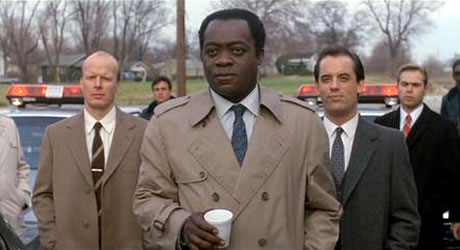 Not only are the FBI onto him, so are the mob. Serano has his two best guys on the job, Tony and Joey, who offer Walsh $3 mil. We know they’ll whack Jack before they hand over the money, and does he. Plus, even after all these years of suffering in the gutter, Jack still won’t take a bribe. As a final nail in the coffin though, Moscone hires Jack’s old buddy Marvin to intercept Jack and take the Duke. All for a low-ball 25 grand. The odds are certainly against our boy.

After some clever sleuthing, Jack finds Mardukas (Charles Grodin – Beethoven) hiding in NYC. After easily capturing him, his first impulse is to put him on the first plane back to LA. “Hell”, he thinks, “I’ll have him back before Midnight day one!”. Not so fast my man. See Mardukas can’t fly. He gets super anxious, claustrophobic and crazy. After getting a gnat’s wing away from takeoff, Mardukas schitzes out and both he and Jack are thrown off.

Time for Plan B. Better get a train instead. It’s during these moments that Mardukas and Jack talk. Or rather Mardukas talks and Jack just sits there smoking. He does this a lot. I mean that. The amount of cigarettes consumed in this movie is enough to give me cancer through the fucking screen. So Jack just sits there, occasionally telling Mardukas to shut up. The Duke, on the other hand, is totally nice and civil. He stole that $15 million to give away to charity, he explains. He’s concerned with Jack’s health and background, and generally plays as a reasonable, charming dude. 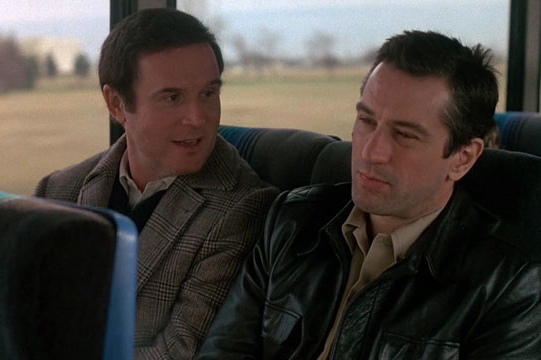 One of the joys of this film is trying to figure out when Mardukas is being genuine and when he’s being full of shit. We’re with Jack on this one, because it’s hard to tell. He’s constantly probing Jack with questions about his background, his family, all without coming across as some sleazebag. He keeps us on our toes though, and nearly gives Jack the slip a few times.

If it isn’t the Duke trying to get away, Jack has to contend with all the other bastards arrayed against him. Marvin get’s Jack’s credit cards cancelled, Moscone’s secretary taps his phone for the mob, and the feds are always one step behind (to the eternal annoyance of Alonzo).

I’m reminded of the Blues Brothers where there are all these groups after brothers, and they’re just doing their thing while it all kicks off around them. It does come across as a bit formulaic with each little set up feeding into the next, but it feels organic enough, and you’re never bored. It’s certainly a road movie featuring De Niro as the straight man and Grodin as the needling bastard. They cross the country via train, truck, bus, and finally foot and we’re with them each step of the way.

So the question is, with no money, no vehicle, and only a few days left to get to LA, can De Niro keep the Duke out of the hands of the feds, the mob and Marvin? Well you’ll have to watch to find out.

Midnight Run is a decent meat and potatoes kinda movie. I mean when I told my good buddy Big Stew I was reviewing it, he said “Oh that film from the 80’s? My Dad liked that”. That’s Midnight Run. It’s the kind of film your action movie-inclined Dad would have liked.

Nothing about the film is exceptional. I’m not being a dick by saying that either. From a narrative perspective, it shares elements with the aforementioned Beverly Hills Cop and Blues Brothers, along with the comedy road-trip-from-hell concept of Planes, Trains and Automobiles. The cop/con thing has been done before too, with 48 hours. Hell, there is nothing in this film you haven’t seen a hundreds times before, and often better. But nothing in this film is bad either. It’s all decent, good quality stuff.

It has good stunt work, some meaty car crashing, a guy-hanging-from-a-cropduster scene, even some helicopter stuff. It’s not particularly violent (only minor squibbing), there’s no nudity, but it does have some top drawer swearing, something I am sure was contractually obliged for De Niro.

The direction, by Martin Brest, is standard stuff. It has a grittiness of his earlier smash hit Beverly Hills Cop, but the humor here is a little bit thinner on the ground. It also lacks the gloss in the cinematography, and the catchy soundtrack. Here we getting a pretty basic Smokey & The Bandit style tonk that helps keeps things moving.

It’s clear Brest was aiming for another smash hit along the lines of Beverly Hills Cop. But you have attribute a lot of the success of that film to Eddie Murphy. His delivery and acting sell that whole street cop punking straight edged LA folk. De Niro can’t muster those kind of comedy chops. But he does pull off the whole hardass, ex-cop thing. Walsh is a hard ass. It’s also clear he hates how far he’s sank, and his ex-family is definitely a sore point too.

While all these problems aren’t solved the Disney way (spoiler, he doesn’t win his wife back), there is actual growth from the character, which is more than can be said of Murphy’s Axel Foley. Hell, at one point, towards the end, Jack smiles and says he “feels like a cop again”. And we’re totally happy for him!

Grodin has one of those faces I couldn’t pin-point until after the film. Once I’d Googled him, I totally recognized him as the bastard Dad from Beethoven. Here he’s playing the role of the dog, who slowly wins over the cold heart of grumpy old Bobby De Niro. Grodin’s Mardukas comes across as very charming and very genuine. Which is why he’s so good at manipulating people, clearly. But deep down he’s a nice dude. You spend the film thinking “he never gave that money away”, especially when you see him dupe Jack. But he did, and while he is always trying to escape, he’s never about robbing poor folk, or screwing anyone over.

Both characters share similar concepts of decency and that’s why they connect. In a similar fashion to 48 Hours, they both bond despite their spiky differences. And while they’ll never be friends (“Maybe in the next life”), you know they’ve rubbed off on each other in some way. It’s actually quite touching.

It could have all been different though, as Paramount had originally wanted Cher to play the Mardukas role. They thought it would spice things up a bit. And you know what? I can see it. I can see that film. It may even have been kind of fun. Thankfully, someone pulled the plug out of the life support for that idea, and Grodin was eventually cast.

The supporting cast also hold up strong. Pantoliano ages the film simply by the horrific 80’s shirts he wears, and John Ashton as Marvin is just great. He’s too dumb to match Jack, but tough enough to get by on his own merits. All his scenes are good stuff.

Kotto is searing, though perhaps a little untested in what he has to do here. He’s more the fall guy, and suffers endless blank looks from people as he explains why he’s the real Alonzo and that the other guy with his badge was fake. To be fair, they may have overplayed that joke a little too much.

Look, Midnight Run is not as funny as Planes, Trains, nor as slick as Beverly Hills Cop, or as whacky as Blues Brothers. But if you like any of those films, you’ll find some real entertainment here. It’s a decent all-rounder. It’s burgers and fries – something that’s easy to like and hard to fuck up. Yeah it’s from the 80’s, doesn’t have any CGI, or any strong female characters, but it’s got decent acting, some genuine laugh out loud moments, and a good story that never stops to take itself too seriously. Get it watched.