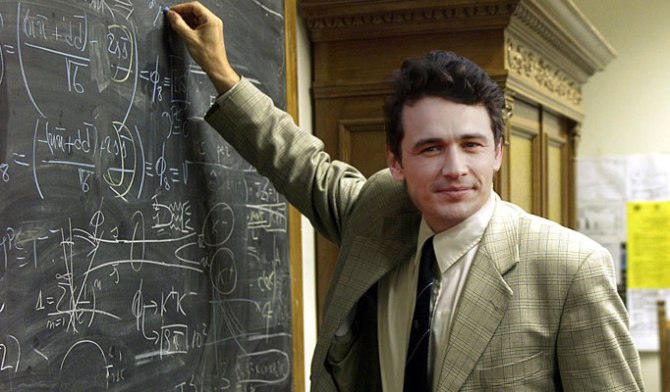 Actor, writer, producer, girl-seducer, poet, and now teacher James Franco (Rise of the Planet Of The Apes) and long time collaborative writer/producer Vince Jolivette are offering their services as guides to any film neophyte for a mere $25.

Find out how to get it in on this below.

Jolivette and Franco aim to give you the tools to adapt one of three preselected stories into an eight minute short film script. Entries will be judged by the community (yay for popularity contests!) and the top picks will be critiqued by Franco himself.

Considering that film school can take years to finish and will cost you thousands upon thousands, the promise of established Hollywood eyes looking at your work for $25 is a real steal. Of course, you can always pull a Tarantino or a Kevin Smith and forgo any form of traditional education altogether and hope for the best.

I know nothing of the three novels – Spoon River Anthology, Winesburg Ohio: A Group of Tales Of Ohio Small-Town Life, and Pastures of Heaven. So No Jack Reacher then.

While the curriculum isn’t hugely deep, you get a lot for your money. They will apparently touch on concept development in regards to adaptations – something that is becoming increasingly popular today as the big studios forgo the risk/reward duel that original all properties bring to the table.

Now that only three actors (Will Smith, Brad Pitt, and Johnny Depp – though Depp has had a few missteps recently) can guarantee to pull in the box office dollar, execs are banking on the pre-existing fans of titles like The Hunger Games or Divergent.

So, thanks to the likes of Lord of the Rings and other trend-setters, we can expect a whole load more book/comic/napkin adaptations in the future. Awesome.

Still, to adapt any sizeable novel requires skill and finesse. Remember you have only eight minutes. It’s not like you’ve got 10 hours of teleplay time like over at Game of Thrones. And even then they cut whole swathes out from the series. However this course does aims to teach you how to best go about this practice, and I’m very interested to see what they suggest.

They aim to show you how to format the screenplay to industry standards too, but I’m sure anyone with an *ahem* acquired copy of Final Draft can figure this out. However it’s a nice extra touch.

Finally, and most importantly they also promise to instruct you in the art of pitching and writing loglines for your work. This is truly invaluable knowledge as the entire Hollywood establishment is bought and sold on these mini-treatments and presentations. If the course can offer any insight here, it will be worth the price of admission alone.

You can find out further information on how to sign up here, and please let me know how you get on. I’ll be getting involved, and I’ll post my findings here as well.

Now all we need is a course from Arnold and Sly on how to be badasses, and it will be Hollywood here we come.